Before the retreat at Blue Cliff Monastery in October, Thich Nhat Hanh (Thay) wrote a letter to the sangha. He describes an interview with a reporter from Time Magazine, in which he talked about the situation in Burma, the Iraq war, and the environment. Here is an excerpt about global warming. For the full letter, go to www.orderofinterbeing.org/docs/TNH_Letter_October_2007.pdf or the Plum Village website.

About global warming, Thay recounted to Time Magazine the story about the couple who ate their son’s flesh — the story told by the Buddha in the Son’s Flesh Sutra. This couple, with their little child, on their way seeking asylum had to cross the desert. Due to a lack of geographical knowledge, they ran out of food when they were only half-way through the desert. They realized that all three of them would die in the desert, and they had no hope to get to the country on the other end of the desert to seek asylum. Finally, they made the decision to kill their little son. Each day they ate a small morsel of his flesh, in order to have enough energy to move on, and they carried the rest of their son’s flesh on their shoulders, so that it could continue to dry in the sun. Each time when they finished eating a morsel of their son’s flesh, the couple looked at each other and asked: “Where is our beloved child now?”

Having told this tragic story, the Buddha looked at the monks and asked: “Do you think that this couple was happy to eat their son’s flesh?” “No, World Honored One. The couple suffered when they had to eat their son’s flesh,” the monks answered. The Buddha taught: “Dear friends, we have to practice eating in such a way that we can retain compassion in our hearts. We have to eat in mindfulness. If not, we may be eating the flesh of our own children.”

UNESCO reports that each day approximately 40,000 children die because of hunger or lack of nutrition. Meanwhile, corn and wheat are largely grown to feed livestock (cows, pigs, chickens, etc.) or to produce alcohol. Over 80 percent of corn and over 95 percent of oats produced in the United States are for feeding livestock. The world’s cattle alone consume a quantity of food equivalent to the caloric needs of 8.7 billion people, more than the entire human population on earth.

Eating meat and drinking alcohol with mindfulness, we will realize that we are eating the flesh of our own children.

Report from the United Nations

In 2005, the United Nations Food and Agriculture Organization (FAO) began an in-depth assessment of the various significant impacts of the world’s livestock sector on the environment. Its report, titled Livestock’s Long Shadow: Environmental Issues and Options, was released on November 29, 2006. In the executive summary, Henning Steinfeld, chief of FAO’s Livestock Information and Policy Branch, asserts that: “The livestock sector emerges as one of the top two or three most significant contributors to the most serious environmental problems, at every scale from local to global. The findings of this report suggest that it should be a major policy when dealing with problems of land degradation, climate change, air pollution, water shortage, water pollution and loss of biodiversity. Livestock’s contribution to environmental problems is on a massive scale and its potential contribution to their solution is equally large. The impact is so significant that it needs to be addressed with urgency.”

Presently, livestock production accounts for 70 percent of all agricultural land and 30 percent of the land surface of the planet. Forests are cleared to create new pastures, and it is a major driver of deforestation. For example, in Latin America some 70 percent of former forests in the Amazon have been turned over to grazing. From these figures, we can see that the livestock business has destroyed hundreds of millions of acres of forest all over the world to grow crops and to create pasture land for farm animals. Moreover, when the forests are destroyed, enormous amounts of carbon dioxide stored in trees are released into the atmosphere.

More than half of all the water consumed in the U.S. is used to raise animals for food. It requires 2,500 gallons of water to produce a pound of meat. Meanwhile, it takes only 25 gallons of water to produce a pound of grain. Livestock in the United States produce an enormous amount of animal excrement, 130 times more than human excrement; each second the animals release 97,000 pounds of feces. “Most of the water used for livestock drinking and servicing returns to the environment in the form of manure and wastewater. Livestock excreta contain a considerable amount of nutrients [nitrogen, phosphorus, potassium], drug residues, heavy metals and pathogens.” These waste products enter streams and rivers, polluting water sources and causing disease outbreaks that affect all species.

The Solution Is Simple

Just as the Buddha cautioned us, we are eating the flesh of our children and grandchildren. We are eating the flesh of our mothers and our fathers. We are eating our own planet earth. The Son’s Flesh Sutra needs to be available for the whole human race to learn and practice. The U.N.’s recommendation is clear: “The environment impact per unit of livestock production must be cut by half, just to avoid increasing the level of damage beyond its present level.” We need to reduce at least 50 percent of the meat industry products, and to do that we must consume 50 percent less meat. The U.N. also reports that even if cattle-rearing is reduced by 50 percent, we still need to use new technology to help the rest of cattle-rearing create less pollution, such as choosing animal diets that can reduce enteric fermentation and consequent methane emissions, etc. Urgent action must be taken at the individual and collective levels. As a spiritual family and a human family, we can all help avert global warming with the practice of mindful eating.

Going vegetarian may be the most effective way to fight global warming.

With love and trust, Thay 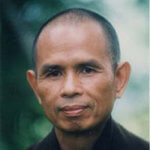