Braving Your Way toward Simplicity, Awakening, and Peace

Dharma teacher Valerie Brown offers an excerpt from her new book to inspire hope in a world that feels very much in need.

Like many people, maybe like you, I’ve had it rough during the last few years with the global pandemic and the full-on reality of climate change. Perhaps you know the feeling of being pulled—at times uncontrollably by a myriad of converging, almost inconceivable life circumstances—into full-blown crisis. Mine began when my father died in 2016. For years our relationship was distant and unloving, partly because we could not accept each other. We each expected the other to change, expected the relationship to be different without actually doing something different. Over time as I reflected on the circumstances of my dad’s harsh and often loveless life and deepened my understanding of him, I softened my bitter judgment of him.  I accepted my feelings that I deserved better but didn’t get that from an imperfect, very human person. He accepted me and we reconciled.

I made my peace, selfishly because I knew if I didn’t transform the rage I had learned from him, I would pass it on to others, and it would consume me. Shortly before he died, I flew back from the United Kingdom, where I was leading mindfulness retreats, to be by his bedside when he took his last breath. He looked at me and took my hand. I was there for him, and he knew it. The rage within me had become something else, something gentler, something that felt more like forgiveness.

The complications continued when my mostly distant and painfully ambiguous marriage of 15 years fell apart in 2018 and my then-partner moved out in 2019. I remarried late in life and was totally unprepared to truly love, having inherited so much of my dad’s seething rage. In the marriage, there was a kind of false hope and wishful thinking (delusion really) that maybe, despite all the warning signs, things would work out. It did for a while, until it didn’t.

About the same time, my beloved brother Trevor was slowly dying of chronic heart failure. Day by day, his heart was getting fainter, weaker until he needed around-the-clock skilled care and went into a crappy nursing home on the Upper West Side of Manhattan, the same place his wife of more than thirty years was living due to her advanced Parkinson’s disease. (Little did I know that heart disease was prevalent in my family. In 2017, my brother Lewis received a heart transplant after more than a month in ICU.) Despite it all, I kept hoping that somehow Trevor would beat the odds, that he’d regain health. But he didn’t. He died in February 2020, and then his wife, Gwyn, died six months later, and I hit a thick fog of grief. I ate but couldn’t taste anything. Spring and then summer arrived, but I hardly noticed the flowering trees. Where was hope now?

In September 2021, perhaps fed by climate crisis, a record-setting storm, Hurricane Ida, destroyed a part of my house. I was dazed and running on pure adrenaline as I worked with disaster volunteers to shovel and haul bags of mud out of the basement—mud that was left behind when a six-foot wall of water wiped out the furnace, electrical panel, and water heater and then ripped through the kitchen, trashing much of the first floor.

As a practitioner, I have learned and lived a basic premise: life contains suffering. I’ve trained and even taken a vow to face the truth of suffering, to see and accept this reality as it is while holding the aspiration to work for a more compassionate, peaceful, and just world.

Hope is not about swinging between optimism and pessimism. We know it’s the desire for things to be other than what they are that is said to be the root of suffering. This isn’t a somber recognition but a capacity to hold the truth of our lives, whether that reality is painful or pleasurable.

I’ve been atomized, deconstructed by the painful losses, the complications I’ve described. And I am called to awaken to a basic truth: whether hope is there or not, I must live from my deeply held values of simplicity, awakening, and peace and let that be my guide.  Rather than weighing my chances and moving forward only if I feel hopeful, I allow my intention, my aspiration, and my purpose to guide my actions and focus instead on choosing to act in alignment with these values.

It’s in not knowing that “hope comes alive.” It’s in our capacity to see things as they are and to believe that our actions matter even if we don’t know, can’t know the outcome. We are guided by what we care about, what matters most to us, and what we can do to support healing within ourselves and in our beautiful and broken world.

When I consider the question I have asked myself these last several years—Where is hope now?— I return to the Buddhist principle of interconnectedness. What happens to me affects you; what happens to you affects me. With this, I realize I am not alone. We all have some measure of suffering and satisfaction. It’s inescapable. “Where is hope now?” I don’t know, can’t know how things will turn out, but I do know that the process of asking myself this question, of staying true to the mystery of this interconnectedness, of recognizing that love is deeply connected to loss, and of living in service of creating a more compassionate life even when compassion seems very far away is an important intention, value, and direction.

We are being called to braver things, to lean forward into hope and action. Despite it all, choosing hope feels right, makes sense. It’s true I didn’t ask for this mess of losses, complications, and challenges. But at some point, recognizing that loss, that woundedness is a part of life as risk is a part of love, leads me to choose hope as a way of connecting with everyone else who knows about loss and love, and it leads me toward a more soul-filled and hope-filled life. Hope is the resolve to live with a generous heart, to dedicate and rededicate myself, to awaken my soul’s voice at this sacred time of global disruption.

This is an excerpt from Hope Leans Forward: Braving Your Way toward Simplicity, Awakening, and Peace by Valerie Brown. Reprinted courtesy of Broadleaf Books, available at www.valeriebrown.us. 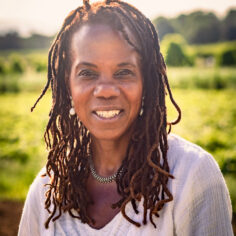 Valerie Brown, True Sangha Power (pronouns she/her), is a Dharma teacher in the Plum Village tradition, ordained in 2018, and... Read more at parallax.org